After almost a decade in the banking industry, Stephen Thomas hit the ground running when he moved into the commercial mortgage space. His competitors have been playing catch-up ever since 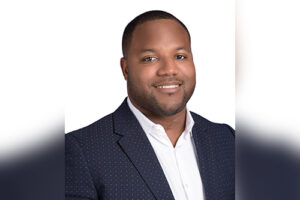 Few people dream of being a banker, but plenty of bankers see their dreams come true. Stephen Thomas certainly didn’t see himself becoming one, but after the 2008 financial meltdown claimed as a victim the clothing store he and his classmates at Humber College launched as a class project, there were few opportunities out there for a young, hungry, jobless entrepreneur.

Thomas’ then-girlfriend (and current wife) urged him to take a job with her employer, RBC. But so soon after launching, growing and then laying to rest his first business, Thomas had no appetite for a banking gig.

“No way. I would never work at a bank. Nine to five? I would never do it,” he remembers thinking. But after a spell of soul searching and less-than-successful job hunting in a recession-levelled job market, Thomas put a pin in his plans to start his own business and took a position with RBC’s contact centre in 2008.

But rather than douse his dreams of once again being an entrepreneur, working at RBC put Thomas on a path of continual development and growing success that led directly to where he is today. After cutting his teeth in direct sales, Thomas’ first significant opportunity came in 2009, when he was promoted to the role of private banking associate for RBC Wealth Management. Equally comfortable handling complex org charts, navigating estate planning and staying on top of countless business accounts, Thomas found the new position to be the perfect fit for his active, curious mind.

“It was never a bore. It was never a job,” he says. “I was always fascinated by the very simple or complex things that people did to earn a living as entrepreneurs.”

Thomas watched in awe as his mentor at the time, one of the country’s top private bankers, signed up multiple new ultra-high-net-worth clients every day. He explained to Thomas that there was no trick involved: His earlier career had been spent in commercial banking; he was simply talking shop with people in his network. His advice for Thomas – young, intelligent and highly ambitious – was to get into the commercial space as soon as possible.

By late 2012, Thomas was a senior account manager at RBC, working with a portfolio of more than 350 business clients. But with RBC’s business banking arm largely the realm of specialists, Thomas felt it was in his best interest to develop his knowledge and expertise in a more general manner. In 2015, he began a two-year stint at BMO as a commercial account manager. It was a formative experience.

“When a customer walks in your door, they’re really depending on you as a trusted advisor, or even a partner, to their business,” he says. “When someone says, ‘I need a million dollars,’ it’s not just them who gets impacted. There’s a whole supply chain behind that client. As the person who takes the call, it’s really your fiduciary duty to do everything in your power – professionally, ethically – to make sure you’re providing unbiased results, advice and work ethic on that transaction.”

The work was eclectic – a manufacturing client today, a research facility tomorrow – and intellectually stimulating, but it wasn’t long before Thomas realized the transactions he was being asked to put together were better suited for other lenders, ones he knew had more appropriate risk appetites or more favourable underwriting parameters. He was faced with the constant challenge of hammering square deals into BMO’s round requirements, all while making the process appear seamless for his clients.

Thomas succeeded despite the friction, working his way into the company’s top 1% in 2016. But with a new baby at home and a wealth of experience and contacts at his disposal, he decided that, rather than work with one bank and pretend it has all the solutions a client could want, why not work with all of them?

Back in the driver’s seat

The following year was a busy one for Thomas. He got his mortgage license, began his relationship with Mortgage Alliance and finally got back to his roots as an entrepreneur by launching Halo Advisory, which he describes as “where high finance meets commercial real estate.” The management consulting firm specializes in complex, high-value transactions where financing can reach as high as 115%.

“When it becomes owner-occupied, the rules kind of change, and we’re able to do some pretty aggressive or creative things,” he says.

While raising awareness of Halo’s services, Thomas has realized just how short the commercial lending environment is on specialists, making it a far cry from the training-intensive environment he encountered in the banking world. He says the phenomenon of residential brokers working the commercial space is “rampant” and that commercial clients are “definitely underserved.”

Thomas says he’s frequently approached by residential brokers hoping to get a crash course on getting commercial deals across the finish line, but it’s not something one can learn in a transaction or two. That’s why Thomas has been urging the industry to enact new designations for commercial brokers that will better protect their clients.

“You’re impacting companies, families and large, large transaction dollar amounts,” he says. “There’s a lot of risk for everyone involved.”

Until the rest of the commercial sector catches up, Thomas is happy to keep leading by example.

Carmen spent 25 years at CIBC as a governance and compliance specialist and brings this expertise to HALO. Carmen leads our operations and supports Stephen with the brokerage compliance and day to day operations needs.

Vanessa joins HALO from Corporate Canada, where she held a variety of roles over a 17 year commercial banking career across the Big 5 Banks in Canada. Vanessa’s Corporate Commercial & Personal Banking experience she brings to HALO include:

Jason is the Managing Partner of TMG Black Capital.

Jason has been a mortgage broker for 5 years and is a real estate investment strategist for wealth builders who want to create a legacy through generational wealth.

Jason has been in the finance industry for over 20 years and has expertise in residential mortgages and commercial banking from the chartered banks. He is a top producing mortgage broker and brings the Keys to the Game to TMG Black Capital to lead and mentor the residential brokers at TMG Black Capital.

Michael is a commercial mortgage associate and credit analyst at HALO and TMG Black Capital.

Michael joined HALO’s Commercial Mortgage Broker training program to learn the commercial mortgage industry and is being mentored directly by Stephen and the HALO team to learn the commercial mortgage industry while leading our residential underwriting for TMG Black Capital. Prior to joining HALO, Michael worked for a chartered Bank as a personal Banker where he completed his CFA level 1 and Level 2 and he is working diligently to complete the level 3 while learning the brokerage industry at HALO.

In addition to his CFA level 2, Michael holds a bachelors degree from Schulich School of Business and worked at several banks in a variety of personal banking roles. His expertise in personal Banking along with his extensive education is a welcomed addition to the HALO team to assist our Black Capital clients with residential mortgages.

Annalay has been a mortgage agent for 2 years and joins TMG Black Capital to provide elite residential mortgage services to investors and business owners and is supported by the HALO team. Annalay has extensive knowledge in alternative mortgages and has extensive private lending contacts which we value at HALO and TMG Black Capital to help real estate investors and business owners. Annalay works with investors of all size from single family, duplex, triplex, to multi family apartments providing tailored mortgage solutions based on the clients needs.

Anna has over 10 years of experience in handling the adjudication of commercial financing for small to mid-market businesses, infrastructure projects and real estate developers. Anna’s expertise lies in construction and real estate financing, risk analysis and developing custom loan strategies for a variety of business operations.

Alex has over 20 years of experience in the financial industry, the vast majority of which was at Canada’s largest financial institution. His experience and specialization includes relationship management, business credit coaching, product and project management, as well as the national implementation of initiatives, credit tools, policies, and procedures. Alex’s passion lies in putting the client first and ensuring the solutions presented are in their best interests.

Alex leads HALO’s management consulting practice and assist business owners with Business Plans and Start Up financing and is working on completing his MBA from Warwick Business school.

Connie is the international director of business finance for Halo Advisory. With over 10 years of experience in the finance industry, she worked her way from a commercial banking intern up to credit manager with BMO Financial Group, handling the adjudication of commercial financing of ranging from small to mid-market businesses. Connie’s expertise lies in risk mitigation, ensuring all her client’s needs are met, and that all possible risks are well within reason, making the best decisions for your growing business ventures.

Gary boasts 20 years of finance industry experience where he spent the last 10 years as a portfolio manager for Real Estate & Construction clientele. Gary was a multiple-time cruise convention winner at Canada’s largest Bank in his role as a Commercial Account Manager in 2016 & 2005 by providing invaluable advice and service to his clients while representing their needs to the Bank. Gary believes in building honest relationships and is excited to help grow your business as a key member of Halo Advisory.